There's tired cliché often repeated on TV news that "both parties are equally to blame." That may be good for talking heads and their advertisers, but does a disservice to the truth. On last Friday's Real Time, Bill Maher was having none of that. In six minutes Bill clearly explains why both sides DON'T.

Rep. Huffman Reacts to State of the Union Address

“Last night’s State of the Union address can be summed up by its utter lack of policy and substance. While I’m glad the President mentioned some important issues such as infrastructure and prescription drug prices, talk is cheap. If the President ever wants to work across the aisle on serious policy solutions to these and other challenges, we stand ready to work with him, but so far he has not shown any interest in collaboration. We will continue working on lowering health care costs and rebuilding infrastructure, and I look forward to seeing if he will really join us in that effort.

“Even more telling than what was included in the President’s speech were all of the priorities he failed to mention, including the urgent threat of climate change, the need to address gun violence and make our communities safer, and the destructive 35-day government shutdown caused and perpetuated by President Trump himself. Fortunately, the House is not waiting for the President: this week, we are holding the first hearings in years on gun violence and on climate change.

“He also failed to mention any new ideas on immigration, or any solution for the thousands of DREAMers who now must live their lives in limbo because of his callous reversal on protecting them. I’m grateful that my constituent and DACA recipient, Alex DeLeon, was able to attend the speech as my guest to remind President Trump that DREAMers deserve certainty to pursue their dreams and to enrich America, the only place they call home.

“I’m concerned about the future of our Union under President Trump, particularly the message we’re sending our allies abroad and the harm he’s inflicting on our democratic institutions. His suggestion that Congress should not exercise our oversight responsibilities is an absolute non-starter. We have a constitutional obligation to oversee the work of the executive branch and to bring accountability and transparency to his administration.

“Fortunately, despite Donald Trump’s uninspired and fearmongering speech, America is resilient and can bounce back from his divisiveness and failed leadership.” 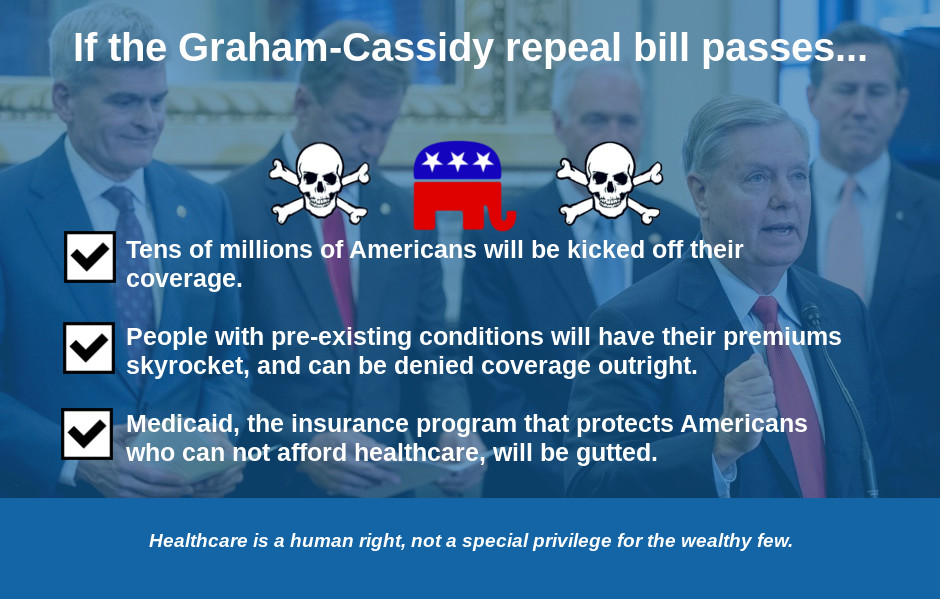 Repeal and go Drop Dead is back in the form of the Graham-Cassidy Repeal Bill. They have until the 30th of September to shove it though -- and Republicans have shown that they are very good at shoving things through without debate, budget scoring, or even a majority. Here is just some of what Graham-Cassidy does:

How to fight back:

Right now it looks like Indivisible is  leading the citizen resistance. Here is a link  to their website that has the tools for defeating this latest iteration of Trumpcare: