Senator Warren cuts thought the bull and exposes Donald Trumps' nominee, Betsy DeVos, for the ignoramus that she is. This small-minded billionaire has no experience in public education, management, nor did she even send any of her kids to a pubic school or college... yet the Republicans are about to make her education secretary.

This is a 5 minute clip from last weeks Senate hearing. Click on the audio player below to listen now, or download a copy of this file to listen to later. 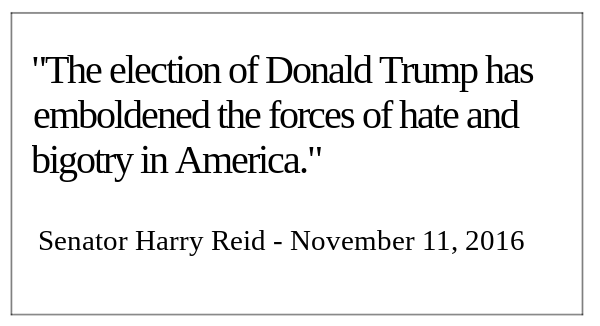 Washington, D.C. – Nevada Senator Harry Reid released the following statement about the election of Donald Trump as the 45th president of the United States:

“I have personally been on the ballot in Nevada for 26 elections and I have never seen anything like the reaction to the election completed last Tuesday. The election of Donald Trump has emboldened the forces of hate and bigotry in America.

Journalist Joe Conason points out that Hillary Clinton has not only released her tax return for the most recent tax year -- but every year going back over 30 years. Meanwhile Donald Trump, having released no tax returns whatsoever, is given a pass by a lazy and/or complicit media.